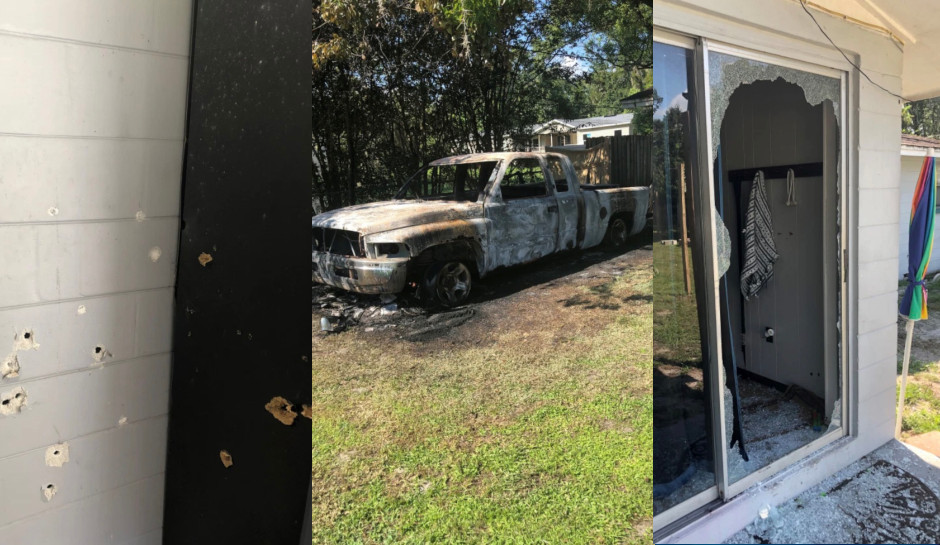 Polk County Sheriff Grady Judd said deputies unsuccessfully searched for the man after 7:30 p.m. Saturday when a woman at the home told them that the man, identified as 33-year-old Bryan James Riley, had said God sent him to speak with one of her daughters, WFLA reported.

But at 4:30 a.m., a lieutenant heard “two volleys of automatic gunfire” near his position, and deputies found that the gunshots had come from the same property.

As other calls about the gunshots came in, deputies and Lakeland Police returned to the location, where they saw a burning truck and glow sticks lining a path to the house.

“At that moment in time as we approached, we saw (Riley) totally outfitted in body armor and looked as if he was ready to engage us all in active shooter situation, but we didn’t see a firearm,” Judd said.

Riley ran back into the house when he saw officers, who immediately heard gunfire, a woman screaming, and a baby whimpering, Judd said.

Officers found the front door barricaded and went around the back, where they were met by the gunman. After an exchange of gunfire, police backed off, and eventually, Riley — who had been hit in the exchange — surrendered. Riley was taken to a hospital for treatment and allegedly tried to grab a Lakeland officer’s gun and fought with medical personnel until he was subdued.

#NEW @PolkCoSheriff released these photos after an early morning shooting left 4 including a baby dead in Lakeland. Sheriff Grady Judd says the suspect who is in custody called himself a ‘survivalist’ and was dressed in camo and a bullet-proof vest. @BN9 pic.twitter.com/9DsyEYS1Ft

Back at the house, officers heard the cries from inside the house and found and 11-year-old girl with multiple gunshot wounds.

“She looks our deputies in the eye and says, ‘There’s three more dead people in the house,’” Judd said. The girl was airlifted to Tampa for surgery and is expected to survive, WESH said.

Concerned the house might be booby-trapped, officers used robots to check the home before entering. They found a man — identified as 40-year-old Justice Gleason — a 33-year-old woman, and the infant all shot dead, with the baby still in their mother’s arms.

Additionally, the baby’s 62-year-old grandmother was found shot dead in another house on the property. The family dog was also shot to death. Another child in the family was found safe elsewhere, Judd said.

Judd said that investigators have so far found no connection between the family and Riley, who described himself as a survivalist and said he was high on methamphetamine during the shooting.

Riley’s girlfriend investigators that he had been behaving erratically of late and suffered from PTSD and depression, likely from tours of duty in Iraq and Afghanistan, where he was a Marine sharpshooter, WESH reported. The girlfriend said that he had done a security shift at a church a week earlier and came home saying he could speak to god.

Then, on Saturday evening, he approached  Gleason as he mowed his yard and said that god had told him his daughter Amber would commit suicide, the girlfriend said. Gleason told him he didn’t have a daughter named Amber and no one by that named lived there. He threatened to call police, and Riley reportedly told him, “No need to all the cops. I’m the cops for god,” and left, the girlfriend said.

Hours later, he returned. “They begged for their lives and I killed them anyway,” Judd said he told officers.